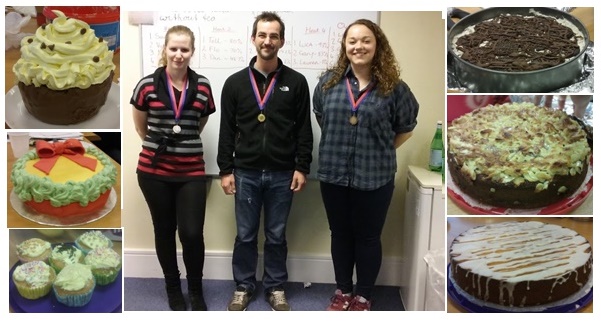 Thirteen members of the Tuttle lab battled it out over five weeks to find out who would be crowned the Great Tuttle Bake Off Champion. Three, two, one …Bake!

In round one Sarah Dyer was made star baker with her take on the classic Malteser tray bake. Other entries on the day were a chilli chocolate cake, lemon tart and some cupcakes. In round two, securing his place in the final was Tell Tuttle with a citrus cake and icing. Other competitors fought bravely baking delights such as a Nutella cake, and a coffee cake. The third round lead to Greg Anderson taking the coveted star baker position for the week. He baked a red velvet cake to impress the judges, which came out as best bake, beating the malteser-covered chocolate cake and a chocolate swirl cake. The last Tuttle lab member to make it to the final was Luca Bartek who dazzled the judges with a beautifully decorated giant cupcake, which beat the lemon and raspberry tiered cake and a caterpillar cake.

Into the final week our four finalists battled it out in the kitchens to see who would be crowned the ultimate Tuttle Bake off champion. Greg Murray entered with a Delicious Strawberry Cheesecake, topped with chocolate trees. Tell Tuttle baked a Scrumptious Apple Cake topped with an Almond Crust. The third cake was baked by Sarah Dyer and was an Enchanting Cookies and Cream Cheesecake finished with Oreos. The final entry was a Stunning Holiday Wreath cake decorated with Green icing and a festive red bow.