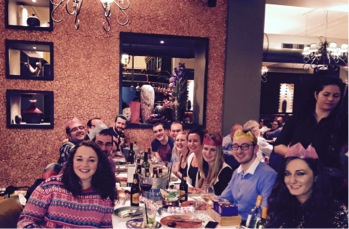 The Tuttle Lab decided it would be a good idea to have a day of festivities to celebrate all their hard work and effort throughout the year. The day started off around midday where we played intense games of beer pong as doubles and singles along with some drinks. We had a table at Viva Brazil booked for 2pm so after several games of beer pong we headed down to Viva Brazil where we were greeted with an all you can eat buffet of different meats some of which included pigs’ heart, sirloin steak and smoked gammon. Some people could not give up and battled through while others had to surrender and admit defeat. All of this meat was washed down with traditional Brazilian beer and wine.

As it was Christmas time we had our Secret Santa gifts to exchange which was done successfully without anyone finding out who their’s was from. Once we had eaten or bodyweight in food we headed back to the office where we continued to play beer pong and have a few more drinks.

Eventually it was time to move on and a few members of Tuttle Lab headed out to the Ark where our Christmas night ended.