By tuttleadmin on December 17, 2014 in Highlights, Research

Our recent work with the Ulijn groups on the use of computational methods to reduce the search space for new tripeptide hydrogelators has been featured on the cover of nature chemistry and has been the topic of a Nature Chemistry News and Views piece by Ehud Gazit. 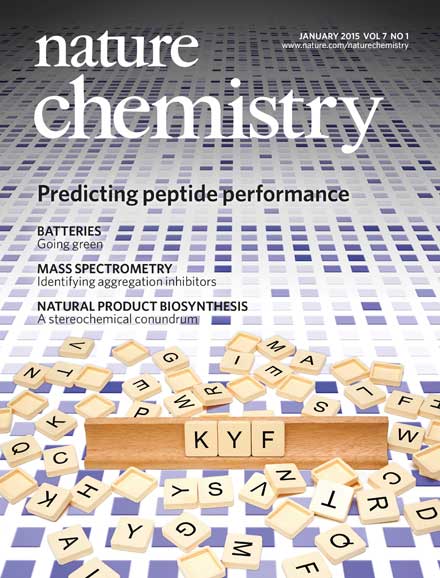 Peptides are the building blocks of living systems and they have tremendous potential as building blocks for new materials.  The function of a peptides is dictated by a different sequence of 20 building blocks – an alphabet of 20 chemical letters, that have function depending on the sequence, like letters forming words.  The number of possible sequences is huge, so it is not possible to test them all which has limited the discovery of new candidate peptides for specific applications. This recent work has developed new tools to screen the peptide sequence space, and used these methods for discovery of functional peptides that are able to form stable gels that are much simpler compared to previously reported systems. These simplified biological gels have potential applications in food science, cosmetics and biomedicine.

Prior to this discovery, there was no way to reliably predict whether a particular tripeptide sequence would form a structure, and scientists would rely on serendipity, conservative modification of known structures or conducting individual experiments of each one. There are 8,000 tripeptides. Given this number there are a large number of experiments that need to be conducted to determine whether they could be functional. The work describes the first examples (4) of unprotected tripeptides that are able to form hydrogels. These peptides were discovered using the screening process described in the work.

The method described can help to identify peptides that form simple, usable structures that can potentially be produced at low cost. The method can be extended to screen for properties other than gelation, making it a more general approach to discovering peptide based materials with desired properties. The discovery of this tool means that the structures that serve as the foundation for such substances as biomedical gels, food products, and cosmetics can be more readily designed.